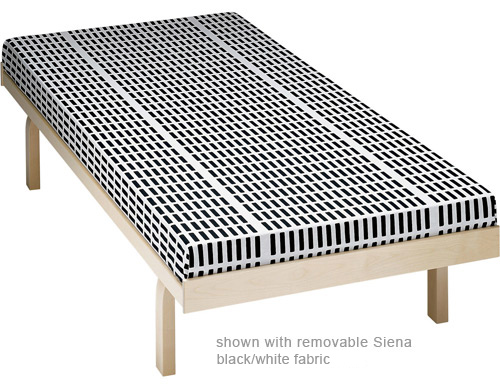 "God created paper for the purpose of drawing architecture on it. Everything else is at least for me an abuse of paper." -Alvar Aalto

Daybed 710 is a versatile seating system which can easily convert from a sitting unit to a sleeping unit. It consists of a birch plywood frame topped with a PU-foam mattress with removable cover. Mattress cover is offered in a variety of fabric options. Optional back cushions can also be added...please call the hive showroom to specify.

Alvar Aalto was a highly talented architect and an eager spokesman for the international modernist movement. Aalto's designs were innovative and radical and became known for his experimental approach to bending wood, which greatly influenced American designers Charles & Ray Eames and Finnish-born Eero Saarinen. His style became known as humanist modernism. Alvar Aalto's dialogue with nature, architecture, design and the human being has become a living legacy.
read more...
$3,810.00
more information