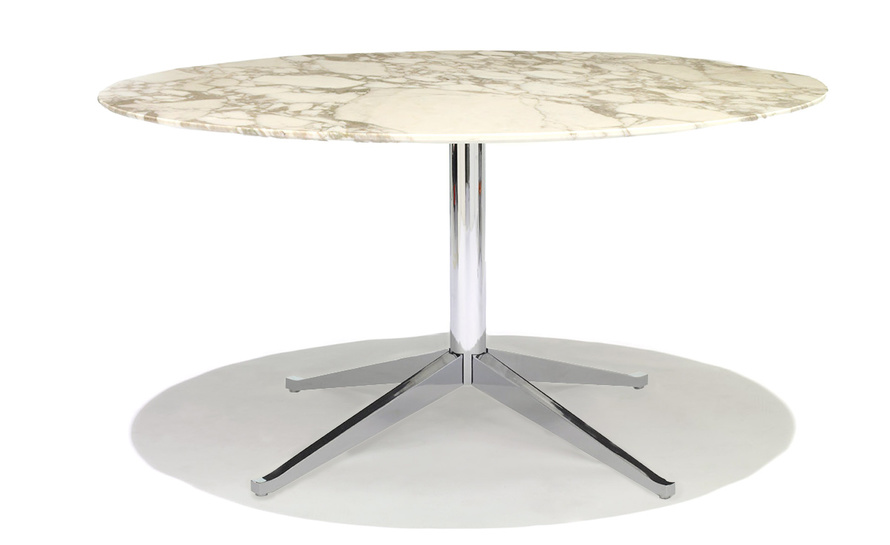 As a pioneer of the Knoll Planning Unit, Florence Knoll created what she modestly referred to as the "fill-in pieces that no one else wants to do." She refers to her own line of desks as the "meat and potatoes" which had to be provided. "I did it because I needed the piece of furniture for a job and it wasn't there, so I designed it." Like so many of her groundbreaking designs that became the gold standard for the industry, the 1961 executive collection made its way into the pantheon of modern classics. Florence Knoll's designs are reserved and cool, severe and angular, reflecting the objective perfectionism of the early 1960s.

While a student on the campus of the Cranbrook Academy of Art, Florence Knoll Bassett became a protegée of Eero Saarinen. She worked briefly for Walter Gropius, Marcel Breuer and Wallace K. Harrison. In 1946, she married Hans Knoll, after which they formed Knoll Associates. As a pioneer of the Knoll Planning Unit, she revolutionized interior space planning with her belief in "total design" - embracing all aspects of design principles which were radical departures from the standard practice in the 1950s, but were quickly adopted and remain widely used today. For her extraordinary contributions to architecture and design, Florence Knoll was accorded the National Endowment for the Arts' prestigious 2002 National Medal of Arts.
read more...
$7,170.00
more information